This week I’ve been getting loads and loads of emails from guys who have committed the biggest mistake of getting women and now want to know how to reverse the damage it has done.

So I decided to write about it so as to help as much guys as possible solve this problem.

If you’ve been following my articles or have read all my books (Bang Rule and Advanced Bang Rule) then I’m sure you know what this mistake is. In fact, I’m pretty sure you’ve even made it in the past and you are now looking for a way to reverse the effect.

Let’s cut to the chase.

…Once you try this, once you tell a girl how much you like her before she starts liking you – it switches off a girl’s attraction switch and, most times, automatically makes her lose interest in you – big time. You have seen it happen in your own life and you know that’s a fact; every girl you tell your feelings keeps messing with you and the ones you don’t like keep coming closer.

If you’ve read my second book; Advanced Bang Rule, then you already know the steps of what to do before you finally reveal how you feel about her and when exactly to tell her that you like her so it will drive her crazy about you.

BUT lets assume you’ve already made the mistake…

…You’ve told her how much you like her before she started showing interest in you, and she is now messing with you, avoiding you, telling you she has a boyfriend or asking you two to just be friends.

How can you fix it?

My first advise to guys with problems like this is I ask them to leave the girl and move on to another girl, then start using the tips they’ve been learning from my articles and ebooks on the girl.

This is why I tell them this; if a girl doesn’t feel a thing for you yet and you go ahead and tell her you like her before you use the tips in my ebooks to get her to have interest in you – it switches off every chance that she would ever feel anything for you ever again. And when a girl goes into this mode, it is usually very very hard to reverse because she already sees you as a guy she has some form of influence over.

But some guys still want to go ahead and keep trying. If you must try to reverse that mistake; Here is how to go about it.

How to go about it – the solution.

After that; the next step is to change from what you used to be and become “A Funny Boss” around her. I explained in detail how to become a “funny boss” in my second book: Advanced Bang Rule.

Here in a nut shell is how to become a “funny boss”.

That girl you confessed your feelings to, if you recall, when you were wooing her – you only said things to impress her, you tried real hard to make her like you, etc.

But here is what to do if you want her back; flip everything you’ve ever been doing and start acting a little bit disinterested. Withdraw a bit, start acting like she is not freaking you again while projecting a higher social value. Then start teasing her often.

Take for instance; you could call her up and say something like: “This woman, how far. Longest time”.

Now, the magic word there is “This woman”. In the past you always tried to be too nice to her and act as if you are so lucky to have her around, but now you are acting like you two are actually equal and you are not acting too hard to impress her again, this makes her starts feeling she is losing the power she used to have over you and it makes her wonder why. From experience, this could make her to want to get you back just satisfy her ego.

Also, lets us take for instance that you call her, she doesn’t pick and she doesn’t return the calls – don’t whine about it just tease her about it. You could call her, and smile so it would show on your voice and say something like : “All this shakara of not picking my call is because I told you I liked you abi, in fact, I don’t like you again. I will replace you with your friend. I even like her eyes more than I like yours”.

Note, say this with a smile or she would think you are serious.

Sometimes you could see her, smile slightly and go like; “Dude, whats up”. Then act as if you want to shake her hands the

way you shake a guy’s. on the other hand, sometimes you could look at her tummy and say something like: “hope you are taking care of that baby I put in there, I don’t want stories”.

The trick is to give her mixed signals – first start acting disinterested, then start teasing her and then sometimes act like you still have interest in her. Also, start treating her like an equal and not like she is doing you a favour being in your life. Then start using the “chic-resistance breakdown steps” that i explained in Advanced Bang Rule on her, starting from step one.

In fact; to get a clearer picture of what I’m saying – get my ebooks Bang Rule and Advanced Bang Rule. Take time to read them at least two times, then actually practice what you will learn it. Don’t just read them and then go back to how you used to do things before, actually practice them. 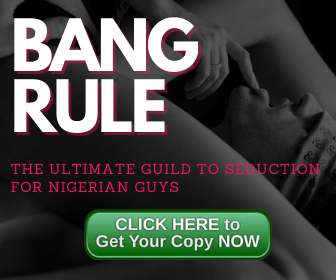 One Thing You Need To Do That Will Make A Girl To Chase You.